The Vatican: A House of Sand and Fog 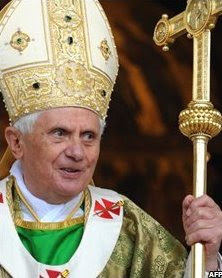 I think of the Monty Python song "Always look on the bright side of life (whistling)..." when I see little tidbits like this. What about making lemonade out of lemons or finding something positive in this debacle...nope. Instead you have more criticisms out of Rome. Because, as accountants and economists, they have the answers. If you are going to point out mistakes, be sure you don't also embody those mistakes.

[As you see here in this photo, the Pope is dressed in priceless linens, sporting a gold staff and jeweled headpiece just like Jesus used to wear...oh wait.]

I don't think it is any place of the Vatican to criticise the unfortunate situation that is happening. After all, ask them if they'd be willing to set the ultimate example and give away the majority of their wealth to the poor. Hmm. That's what I thought.

"You hypocrite! First remove the beam from your own eye, and then you will see clearly enough to remove the speck from your brother's eye."

In this article - the last line in fact - am I reading this as an insinuation that the U.S. is only to blame? "nations once rich in faith and vocations are losing their own identity under the harmful and destructive influence of a certain modern culture"...maybe I'm reading that wrong ...

The current economic crisis is a shame and there are always people and administrations that need to be held accountable. It really does suck. But for the head of the Catholic Church to say that those who think that "concrete things we can touch are the surest reality" are deceiving themselves calls to mind for me a portion of the Gospel of Thomas (one of the gospels left out of the modern bible) in which Jesus said (paraphrased):

"The Kingdom of God is within you and all around you" and "Split a piece of wood, and I am there. Lift up the stone, and you will find me there."

Those who believe God is housed in churches of stone available for contact only on Sunday mornings are truly deceived.

The people, families and institutions affected by this unstable economy are experiencing, in no uncertain terms, humility. Humility is an instrument of God. Good will come out of this - people downsize, simplify and get back to the basics of what really matters in life - each other. As much as it sucks and hurts, good will come out of this. Why do we need irrelevant sideline coaches like the Pope to point out, once again, what you all are doing wrong?

Jesus would pitch in and help out and encourage each of us to help one another during these hard times. To share the burden... not point fingers. At least, that's the God I believe in.

The global financial crisis is proof that the pursuit of money and success is pointless, Pope Benedict XVI has told a meeting of bishops in Rome. The head of the Roman Catholic Church said that the disappearance of money as banks collapsed showed that wealth meant "nothing". The Pope said that people should instead base their lives on God's word. Those who think that "concrete things we can touch are the surest reality" are deceiving themselves, he said. The crisis in the financial industry has seen billions of dollars wiped off the value of shares, and a number of seemingly untouchable banking institutions have been taken over, nationalised, or have collapsed. Speaking to the bishops assembled at the Vatican, Pope Benedict said those who seek "success, career or money are building on sand". When he opened the Synod on Sunday, the Pope attacked modern culture, saying that "nations once rich in faith and vocations are losing their own identity under the harmful and destructive influence of a certain modern culture".
Posted by SM at 1:42 PM

"proof that the pursuit of money and success is pointless"
Thanks Pope Benedict. Not, of course that you have to worry about where you sleep at night, the well being of your family, health insurance, or putting food on the table, but still, thanks for the advice. Advice like this means a lot coming from someone with no financial concerns whatsoever, who wears golden hats and carries scepters around wearing a filigreed robe all day. No, really Pope, I can't tell you how much it matters when you tell us that the pursuit of money and success is pointless. Nevermind that the financial success of the parents is the greatest predictor of educational success in children. You don't need to worry about where your kids go to school(several reasons there eh Pope?) or whether they will be stigmatized by having to rely on welfare. You sit in a throne and proclaim nonsense like this, extolling the citizenry on the vices of financial success in favor of a simpler life. Great advice...for a Pope or even a priest. But of course we can't all be popes and priests, the rest of us have to contribute to a functioning global marketplace so that we can all eat food. You know what Pope? Fuck the 2/3 of the world that live on less than one US dollar per day. I'm sure their problem as they struggle to find clean safe drinking water and a hovel to scrape together is their decadent lifestyle. Too bad you don't invite a few of them over to the Vatican for a nice meal, or sell some of the priceless art and relics and feed and clothe and put a roof over the heads of the hungry. When you're standing there Pope, with your golden scepter, please make sure not to slip and impale your hypocrisy on it. You might damage the scepter.

This party is a BYOR party: Bring Your Own Rage.

WOW - Bravo for an eloquent verbal evisceration of the papacy...and rightly so. Though I am not Catholic, I still wish the Pope, being in such a position of power would set a good example. But he can't step down as CEO of one of the most powerful businesses in the world.

The last two sentences are poetry.