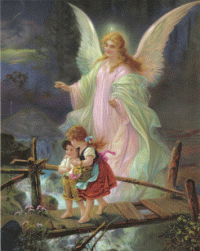 I half-paid attention to a few minutes of a documentary on the History Channel the other night about "Angels" and the role they played in myth and Christianity etc.

Once life stops moving so quickly, thus preventing me from posting as frequently as I would like, I will have to do some research into this popular idea. I know they are mentioned in the bible, but also have obvious ties in mythology, which is interesting, but does an omniscient God really need helpers? Or maybe they are his PR staff?

I remember a small glossy print my Grandma used to have hanging in her house. It showed two children crossing a rickety wooden bridge over a fast-moving stream with a large vibrant angel behind them. [See photo in this post.] It was a comforting photo and talk of guardian angels occurred in the household I grew up in. But how far off is this notion? Does the obsession with angels rank up there with the cult of the Virgin Mary? Is God an abstract afterthought when it comes to how people view the popularly iconic angel?

There is even a prayer that I recall from childhood: "Angel of God, my Guardian dear. To whom God's love commits me here, Ever this day, be at my side, To light and guard, Rule and guide. Amen."

This is, when it comes right down to it, a prayer to an angel.

[Thou shalt have no other gods before me?]

I'm always seeing tacky angel-things on people's bumper stickers such as "Never Drive Faster Than Your Angel Can Fly". I read these and they seem so spiritually immature to me. Childish, even. Like "Never Leave Your Closet Door Open Wider So the Monster Inside Won't Squeeze Through".

I just think our focus should revert back to God, his love and our gratitude and connection towards him, not his mother, not his messengers (if they be angels), etc.

Time to do some research.

On a separate note, I would also like to take this time to express my joy over the inauguration of President Obama. "Obama Lifts Hand, Raises Nation"
Posted by SM at 11:39 AM 2 comments:

You cannot have a law without having some penalty in the case of disobedience. So if God wants to do more than simply make requests, if he wants to issue commands or to establish the rule of law, he must also ensure that those who disobey his commands or laws suffer a punishment of some kind.

To punish without a corrective purpose is nothing more than retaliatory vengeance. A loving parent would never inflict such a system upon their child. Fitting TEMPORARY punitive steps are taken in order to educate and correct. In even our flawed human society, excessive punishment is termed abuse.

Contrary to popular belief, the Old Testament principle of retaliatory justice -- "an eye for an eye and a tooth for a tooth" -- was never instituted for the purpose of justifying harsh punishment for serious crimes, something that no one at the time would have questioned: instead, it was instituted for the purpose of eliminating EXCESSIVE punishment, such as capital punishment in exchange for a tooth. The idea was very simple. We must measure the seriousness of a crime according to the degree of harm done, and we must proportion the punishment to the seriousness of the crime.

Lex talionis is Latin for 'equal retribution'. For what sort of crime might everlasting torment be a just retaliation? If God is both omnipotent and perfectly loving, no such crime is even possible, it would seem, in a world that God has created and therefore governs. For if an action were so heinous, so dire in its consequences for others that its perpetrator would deserve to suffer everlastingly in return, then a loving God would never permit it in the first place; his love for the potential victims would require him to protect them from such irreparable harm, and in so protecting them, he would likewise be preventing others from doing irreparable harm. Insofar as the degree of harm done determines the gravity of an offense, therefore God could never permit any offense that would warrant everlasting torment as a just penalty.

If I approve of a God who fails to love some of my neighbors (even though I know not which ones) and I am grateful for this fact, then I do not truly love or will the good for all of my neighbors. The theological name for any belief that interferes with the capacity to love is called sin.

The Lord's justice is his mercy and his mercy is his justice. One in the same. I do not think God is a bipolar schizophrenic being.
Posted by SM at 1:15 PM No comments: