How Priests Accused Of Abuse Can Go Undetected (NPR)

The Good, The Bad, and the Beautiful

I'm 3/4 through Rob Bell's book "Love Wins" and am at the point where I want to buy copies for some people I know who are on the fence about the whole "eternal hell thing". The sheer amount of questions raised is brilliant. It is more of a book of conceptual "what if's" and "if this, then that" scenarios that allows the reader to actually think through the *logic* of the Jesus story and bible teachings. And it is written in plain language so that one need not hold a theology degree to comprehend it.
Though he claims that he's not a Universalist, everything I'm reading so far points to that all consuming love of God that is characteristic of Christian Universalism. And may I add that it is a breath of fresh air that he actually cites the original Greek and Hebrew words in the Old and New Testament that are so pivotal in pointing to God's message that hell is not necessarily eternal at all (i.e. aion, Hades, Tartarus, Sheol, etc.)
Speaking of the love of God, I need to share the following video which moved me to tears. I am utterly and completely humbled.
http://www.facebook.com/video/video.php?v=1378237514624
And on a personal note, I recently realized that I have been unfriended on Facebook by someone who I was good friends with in high school. I'm not entirely sure why but I can only speculate that it was over our differences in faith. She is a fundamentalist Christian and I am a Christian Universalist (Heretic). There was no dialogue over the reason so I can't say for sure, but if it is the reason, I'm...very disappointed.
I find that traditional Christians are much more difficult to have intelligent debate with about God saving everyone in the end. More often than not they are very insistent on their belief elitism, which means that they are not interested in listening or examining WHY they believe what they believe without feeling properly insulted at being questioned to begin with. I'm closer to having fellowship with unbelievers, at this point. My husband and best friends WHO ARE ALL WONDERFUL ATHEISTS understand and respectfully discuss with me the Love of God and my views on Universalism better than anyone else. Our discussions are intelligent and help raise further questions that assist my own personal examination of faith. They are the wetstone on which I sharpen my spirituality. MY ATHEISTS are also noticeably more kindhearted and moral than many of the self-proclaimed Christians I know. Bell touches upon a bit of this in his book, too.
There are some great truisms in Bell's book and when I have it in front of me (perhaps next time) I will do some quotin'.
Posted by SM at 1:30 PM 2 comments:

I'm calling this the "Bell curve". Once you learn about the Good News, you can't logically go back to the old way of thinking. This pastor, I guarantee you, will never go back to his old ways of thinking.
I think some "Christians" hope that they are among the elite that will make it to heaven, watching the billions of other poor misled saps burn in hell forever. Because it is nice to feel special...and chosen...and right. I think this wish is selfish, anti-Christian, immature at best, criminal at worst. I think if the crucifixion was carried out in order to save the ENTIRE world, then it was a huge failure - according to the Christian traditionalist belief. Also, if I believe in Christ (thus securing my salvation), then shouldn't I credit myself for my own salvation? Does Jesus ride by and slip the belief pill in the drinks of the chosen?
For God so LOVED the world... right?
I, for one, will take my chances in over-estimating the Love of God. Every single being is as loved by God as the next on this rock. Those who think otherwise are retributionists who distort the Gospel that Jesus taught.
Once my eyes were open to the all-encompassing love of God, I began to see others more as brethren and less as "those poor misled saps", thus my empathy and agape increased - God's love being the Great Equalizer. Not the Dividing Line.

Bell claims that he is not a "Universalist" so I am intrigued to see what the controversy is. (Also, who cares if he wears black - since when are colors evil?) I admit I ordered the book and will write some thoughts on it as I read it.

Another interesting TIME interview with a Bishop - Christians Wrong About Heaven, Says Bishop
It is a blessed thing that we live in an age where we don't get burned at the stake for such progressive thoughts : )
Posted by SM at 2:25 PM No comments:

"Versions of Hell" (Or, My Audio Documentary)

I recently took an Audio Documentary class as part of my graduate work. I was able to choose the topic for my final audio piece and so I chose to interview people of differing beliefs to see whether the traditional ideas of hell still resonated with them. Narrating the piece, I talk to an atheist, a Muslim, a Jew, a Catholic, and a Christian Universalist with the underlying attempt at sound production. Here it is...all 10 minutes of it.
Posted by SM at 10:16 AM 2 comments:

Here is a trailer that Pastor Rob Bell created about what got him thinking about Universalism. It is worth watching even if one has zero intentions of buying his book.

The Real Time Evolution of the Bible 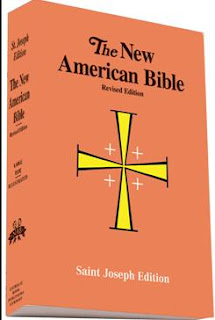 The U.S. Conference of Catholic Bishops has ordered up a new translation of the Bible, one it says is more accurate, more accessible and more poetic.

Now "booty," a word that sets off snickers in Sunday school, will be replaced by the "spoils" of war when the newest edition of the New American Bible, the English-language Catholic Bible, comes out on Ash Wednesday, March 9.

"We needed a new translation because English is a living language," says retired auxiliary bishop of Milwaukee Richard Sklba, part of the review and editing team.

Fifty scholars and translators, linguistics experts, theologians and five bishops spent 17 years on the project. They were immersed in original manuscripts, the Dead Sea Scrolls and archaelogy findings unearthed since research behind the current text, published in 1970.

While Catholics may read from any of two dozen English translations, the New American Bible is the one owned by U.S. owned by U.S. bishops for prayer and study.
Posted by SM at 12:16 PM No comments:

Fellow Heretics In the News