I have to admit I had my reservations about it. I was thinking that he was going to bash the very idea of believing in God. But he did not. He did however, with just cause and much to my agreement, question the Christian, Muslim and Jewish religions' fundamentalism and its followers about the discrepancies and man-made ideals which they cling to.

The cause of much of the world's problems are ingrained in the major organized religions and there is no disputing this fact, folks. The intolerance of these fundamentalists has disgraced the face of the planet. The very message Jesus taught is lost on many Christians. The idea that people in 2009 cannot accept the basic tenets of science (i.e. evolution, the age of the earth, dinosaurs, etc.) is also disturbing.

In one scene of the movie Bill Maher visits the Creationist Museum in (I think) Tennessee. In this incorrect-timeline and literalist museum, there is an exhibit showing people living during the time of dinosaurs. I laughed out loud. People are paying money to walk through this "museum". And in many cases, the people being interviewed by Bill Maher get flustered and all defensive (and end the interviews) because they could not answer the questions he posed to them. Simple questions that they should know the answer to since it is what they believe. To believe something without question is scary.

It is about time someone put together a documentary film about this topic. There is a snarkiness to this film that is both delightful and jaw-dropping at times. As a Christian Universalist who has left organized religion, of course, I endorse this film. Anyone entrenched in an organized religion will likely take offense to this film and perhaps shut it off. Like Bill Maher, I think doubt is a healthy thing as well as asking questions of one's religion. Anyone not willing to try and answer or at least think about the tough questions of this film needs to re-evaluate the reasons why they believe at all.
Posted by SM at 11:35 AM No comments:

I credit my husband for drawing my attention to this humorous look at "Traditional Biblical Marriage". Enjoy!

Praise God and Pass the Ammunition 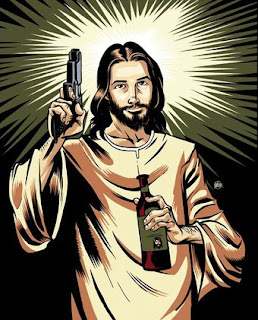 And Jesus said "Peace, I leave unto you."
He healed the soldier whose ear was cut off by one of his own disciples' sword.
He believed in passive resistance in the name of God's Love.
He discouraged strife and emphasized forgiveness.
I don't believe he carried any weapons, except that of wisdom, logic and love. Maybe a staff.
I think he would look at these "Christians" and tell them to disarm and open their eyes.
I don't believe violence should answer to violence nor do I believe brandishing a symbol of warfare, division and violence is a good idea when attending a "Christian" mass. In this article below you will read about the unbelievable ass-hattery that is demonstrated by those who think they are acting right by the Words Jesus Spoke through "an alternative marketing tactic".
This past week a doctor who had performed late-term abortions was entering a church when he was shot dead by a fanatic. There were even protests at this poor doctor's funeral, which I find dispicable. What happened to the message of God? To Judge Not? To let the first without sin cast the first stone? Forgiving 77 x 7, etc. I think this type of terrorism is just as bad as terrorist acts by radical Muslims. Same thing, maybe even worse. What would Jesus do? Not that.
I'm not against owning or shooting a gun, but I am against attempting to bastardize yet another Christian church by:
a) trying to merge it with a gun range / gun show
b) asking for Murphy's Law to step in because you just know not everyone is showing up with guns unloaded.
c) a huge distraction from the reason for going to church. God comes in second to your neighbor's Desert Eagle, fella.
People are floating further away from the message of Jesus Christ. Soon Smith & Wesson or Benelli will be church sponsors. And it is not just this one particular church. It is the whole of fundamentalist churches (including Catholicism) who chant and cheer on war and the deaths of abortion doctors and then turn to their neighbor to offer the sign of peace. A congregation of judges?
God help us all.
------------------
Kentucky Pastor to Hold a 'Bring Your Handgun to Church' Service
Wed Jun 3 2009 Graphic and article courtesy of www.Gawker.com
In light of George Tiller being gunned down in a church, this blows the mind: a Louisville pastor wants to expand his flock by encouraging them to brandish firearms while they worship. A Kentucky pastor is encouraging people to attend a service with guns in holsters, enter a raffle to win a free handgun, and be sermonized by operators of gun stores and firing ranges. In what's being called an "Open Carry Church Service," Pastor Ken Pagano of New Bethel Church in Louisville (Yes this is actually happening in the state's most metropolitan city and not somewhere in Appalachia!) says that he's just trying to "think outside the box" to grow his flock. The event, slated for late Saturday afternoon, June 27, is being promoted with online posters, including one using a red font resembling splattered blood with the words: "Open Carry Church Service." Pagano said the poster wasn't intended to glorify bloodshed and that the lettering was just "a font that somebody developed." And he said he didn't want the event to be confused with regular Sunday worship at the Assemblies of God congregation. "It's just a celebration we're doing to coincide with Fourth of July," he said. "There are people who own firearms and do so responsibly and enjoy them as a sport, maybe like golfing or bowling." Win Underwood, one of the owners of Bluegrass Indoor Range, said he would try to attend the event if family responsibilities allow. "I'm not aware that anybody's ever done anything like this before," he said. New Bethel members regularly have outings at the firing rang, he said. "You would be surprised how many churches use shooting for recreation with fellowship," he said. Underwood said he's a religious person himself and believes the First and Second amendments are closely tied in the nation's Revolutionary War history. "Guns are the one thing that secured freedom of religion for our country," he said. Dave Lowley, an elder at the church and a military veteran, supported the event as part of the congregation's efforts to conduct creative evangelistic outreaches. "We're advocating gun safety and gun awareness," he said. At the end of the piece, Pastor Pagano explained the Christian justification for all this. "Not every branch of Christianity is pacifistic," he said. If someone is "not against the First and Second amendments, I'll be glad to sit down with anybody to say, 'How can we do this better?'" Jesus must be looking down on all of this beaming with pride right now. You just know if he were down here with us he'd be packing, and probably using his heat to murder OB/GYNs who perform abortions.